• A Belief Network allows class conditional independencies to be defined between subsets of variables.
• It provides a graphical model of causal relationship on which learning can be performed.
• We can use a trained Bayesian Network for classification.
• They allow for probabilistic dependencies and probabilistic conditional independence.
• These characteristics make it useful for NLP.

There are two components that define a Bayesian Belief Network −

• Each node in a directed acyclic graph represents a random variable.
• These variable may be discrete or continuous valued.
• These variables may correspond to the actual attribute given in the data. 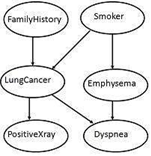 The conditional probability table for the values of the variable LungCancer (LC) showing each possible combination of the values of its parent nodes, FamilyHistory (FH), and Smoker (S) is as follows −

Bayes' Theorem is named after Thomas Bayes. There are two types of probabilities −

where X is data tuple and H is some hypothesis.

According to Bayes' Theorem,

Step 3: Insert your answers into the formula:

The probability that a buyer bought bucket seats, given that they purchased an alarm system, is 50%. 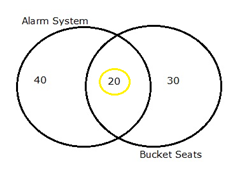 What is the probability a randomly selected person is male, given that they own a pet?

Step 1: Repopulate the formula with new variables so that it makes sense for the question (optional, but it helps to clarify what you’re looking for). I’m going to say M is for male and PO stands for pet owner, so the formula becomes:

Step 4: Insert your values into the formula: