File systems represent an intermediate layer between the software package and the end users, that is the applications wherever the volume manager is commonly used between the file system and native hard disk. 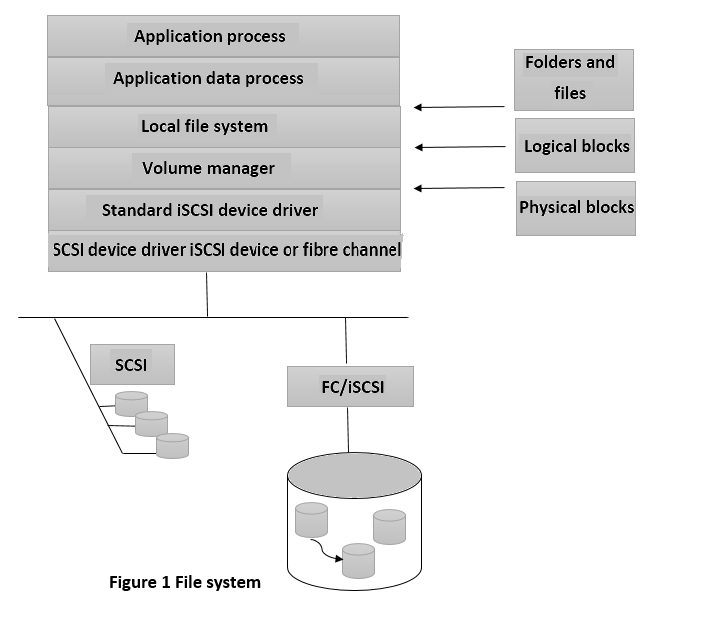 Multiple services are provided by file systems and the volume manager for several applications. Database systems such as DB2, MySQL, ORACLE, Big Data, etc. will get the file system and can manage the blocks of magnetic disk on their own. The performance of the database system is often improved, however, the management of the info/database system is tough. Hence, data base systems are typically designed to store knowledge in the type of files that are managed by the file systems. To attain higher performance for a selected database system, the directors (similar to switches but have more number of pins, etc.) usually like to pay more for high configured hardware which might be designed to the info/data base system to store directly into a block oriented hard disks

NFSs measures the natural extension of local file systems, end users and applications will access all the files and directories that are configured to the particular application on a particular PC in network file system. File servers measure, therefore, the necessary in fashionable IT environments that are p reconfigured file servers, known as NAS.

With the help of NFSs, end users and applications will work on a typical data set from numerous computers. In order to try this on OS computers, the supervisor should link a file system exported from an NFS server into the local directory structure nature by exploiting the mount command. On windows computers, any user will do that himself/herself by exploiting the Map Network Drive command. Then. Both in the OS and in windows, the fact that the data is being accessed from an NFS, instead of a neighborhood mance variations.

Long before the global World Wide Web (WWW), the file transfer protocol (FTP) provided a mechanism by means of which the users could exchange files over the web. Even today, FTP servers stay as a vital means of distributing freely obtainable software system and freely obtainable documents. In contrast to NFSs, access to FTP servers is clearly visible to the tip user. Users need a special FTB shopper with whom they will copy back and forwards between the FTP server and their native laptop.