a) Prioritization for regression test snite.

b) Prioritization for system test snite.

iii) Total branch coverage Prioritization: In this Prioritization, the criterion to order is to consider condition branches in a program instead of statements, thus it is the coverage of each possible outcome of a condition in a predicate the test case which will cover maximum branch outcomes will be ordered first.

2) Risk- based Prioritization: Risk based Prioritization is a well-defined process that prioritize modules for testing. It uses risk analysis to highlight potential problem areas whose failure have adverse consequences. The testers use this risk analysis to select the most crucial tests. Thus, risk based techniques and to prioritize the test case based on some potential problems which may occur during the project.

4) Prioritization using relevant slices: During regression testing the modified program is executed on all existing regression test, cases to check that it still works the same way as the original program except where a change is expected. However re-running the test suite for every change in the software makes regression testing a time consuming process. If we find the portion of the software which has been affected with the change in the s/w we can prioritize the test cases based on the information this is slicing technique.

1) Execution slice: the set of statements executed under a test case is called the execution slice of the program.

2) Dynamic slice: the set of statements executed under a test case having an effect on the program output is called the dynamic slice of the program with respect to the output variable.

6) Data flow based test case Prioritization: Data flow testing is a white box testing technique that can be used to detect improper use of data values due to coding errors. The data usage for a variable affects the while box testing and thereby the regression testing. If the Prioritization of regression test snite is based on this concept the rate of detection of faults will be high and sceptical bugs can be discovered earlier.

7) Module coupling slice based test case Prioritization: This techniques is based on dependence and coupling between the modules and proceeds in two steps. In the first step we find the highly affected module whenever there is a change in a module. In the second step we prioritize the test cases of the affected module identified in the first step. In both the steps coupling information between the modules is taken into consideration.

8) Program structure analysis - Based test case Prioritization: This technique is based on the analysis of the source code witted by the developer’s. They considered various factors based on structural programming and then these factors were assigned a weight is assigned on the basis of a survey conducted in various organizations among different programmers. The factors and corresponding weight of the factors are given below: 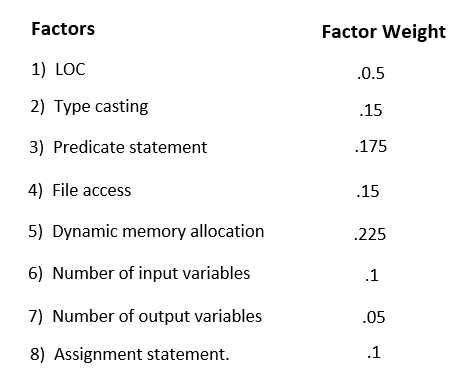