The operations that manipulate regions are:

Locking and Unlocking a Region

The kernel allocates a region when fork, exec, and shmget (shared memory get) system calls occurs. Just like i-nodes, the kernel has a free list of regions. When a region is to be allocated, the kernel picks up the first region from the free list and puts it on the active list. The i-node is used by the kernel to enable other processes to share the region. The kernel increments the i-node reference count to prevent other processes from removing its contents when unlinking it.

The pseudocode for allocreg is given below:

We have to make sure if the i-node pointer is not null because there are a few exceptions where a region is not associated with an i-node.

Attaching a Region to a Process

The kernel attaches the region to a process address space by using attachreg system call. It is used in fork, exec, and shmat. The region being attached may be newly allocated or already allocated region which is to be shared.

The algorithm is given below:

Changing the Size of a Region

The stack region can be changed (it can be expanded or shrunk) automatically when nesting of calls is done. It uses the growreg algorithm. The data region of a process can be expanded with the sbrk system call. It also internally calls growreg. Both of these regions are private to a process. Shared regions cannot be extended, so there are no side-effects of growreg.

The algorithm growreg is given below:

If a system supports demand paging facility, the kernel can "map" a file into process address space when the exec system call is made. It then read individual physical pages later if necessary.

For example, this problem will become memory faults when user programs access address 0 illegally. Programs with pointer variables sometimes use them without checking that their value is 0 and, hence, that they are illegal for use as a pointer reference. By protecting the page containing address 0 appropriately, processes that errantly access address 0 incur a fault and abort, allowing programmers to discover such bugs more quickly.

The algorithm loadreg is given below:

For example, if the kernel have to store text of size 7K into a region that is attached at virtual address 0 of a process but wants to leave a gap of 1K bytes at the beginning of the region. Now, the kernel will call the algorithm allocreg and allocate a region table entry.

Kernel also attaches the region at address 0 using algorithms attachreg. Now it invokes loadreg, which invokes growreg twice. It will leave 1K byte gap at the beginning of the region first, and second, to allocate storage for the contents of the region and growreg allocates a page table for the region. The kernel then sets up fields in the u-area to read the file: It reads 7K bytes from a specified byte offset in the file (supplies as a parameter by the kernel) into virtual address 1K of the process.

It is shown in the following diagram: 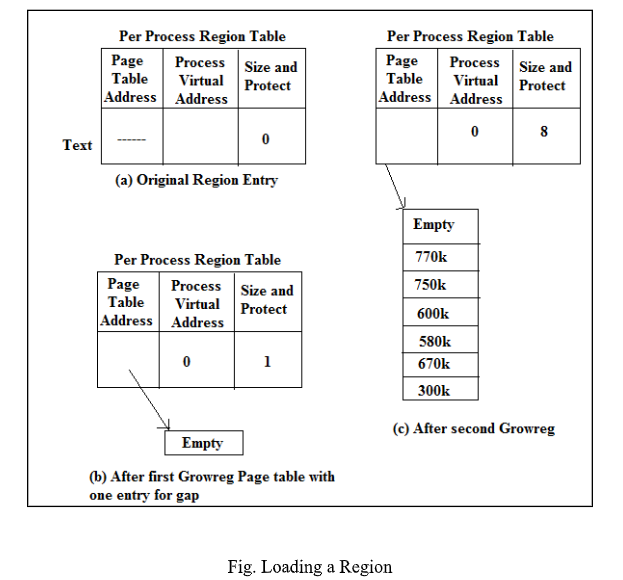 When a kernel no longer needs a region, it frees the region and places it on the free list again. The algorithm freereg is given below:

Detaching a Region from a Process

The kernel detaches regions by the exec, exit, and shmdt system calls. It updates the pre-region entry and cancel the connection to physical memory by invalidating the associated memory management register triple.

The algorithm detachreg is given below: 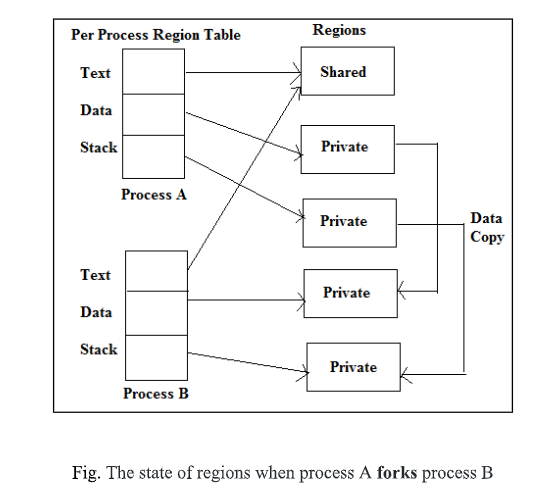 Processes sleep inside of system calls awaiting for a particular resource or even if a page fault occurs. In such cases, they push a context layer and do a context switch. The context layers of a sleep process are shown below: 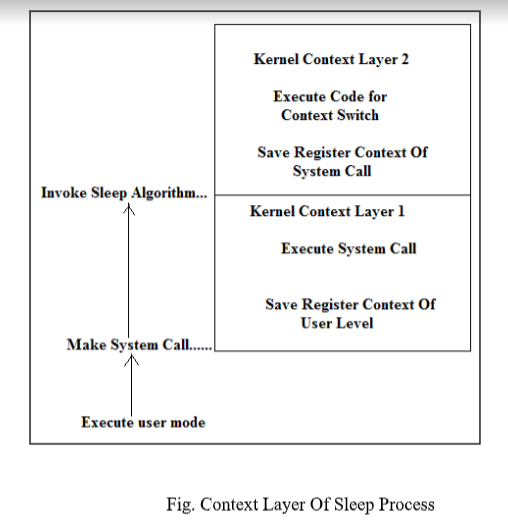