5] VHDL when used for system design, it allows behavior of required system to be modeled and simulated before synthesis tools translate design into real hardware.

The entity declaration specifies the name of the entity being modeled and lists the set of interface ports. ports are signals through which the entity communicates with other models in its external environment.

The internal details of an entity are specified by an architecture body using any of the following modeling styles: 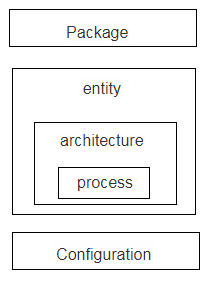