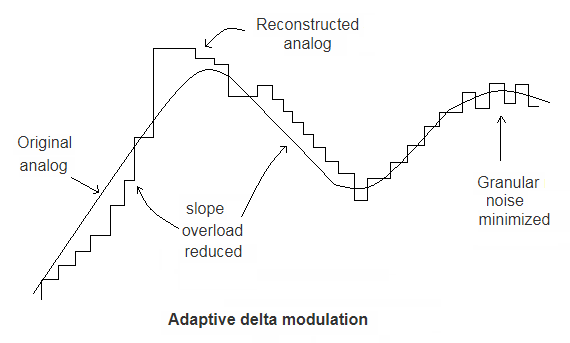 when the output of the transmitter is a string of consecutive IS or Os, this indicates that the slope of the DAC output is less than the slope of the analog signal in either the positive or the negative direction.

Essentially, the DAC has lost track of exactly where the analog samples are, and the possibility of slope overload occurring is high, with an adaptive delta modulator, after a predetermined number of consecutive 1s or 0s, the step size is automatically increased.

After the next sample, if the DAC output amplitude is still below the sample amplitude, the next step is increased even further until eventually the DAC catches up with the analog signal.

when an alternative sequence of 1s and 0s is occurring, this indicates that the possibility is high, consequently, the DAC will automatically revert to its minimum step size and thus reduce the magnitude of the noise error.

A common algorithm for an adaptive delta modulator is when three consecutive 1s or 0s occur, the step size of the DAC is increased or decreased by a factor of 1.5: