When a signal is sampled by narrow pulses, then the time interval between 2 pulses can be used to transmit the samples of other signals.

In this technique, signals are multiplexed in time, domain and hence called as Time Division multiplexing it is also used to transmit no. of signals on a single transmission media and hence act as alternative to FDM.

The block diagram of PAM/TDM is as shown below. 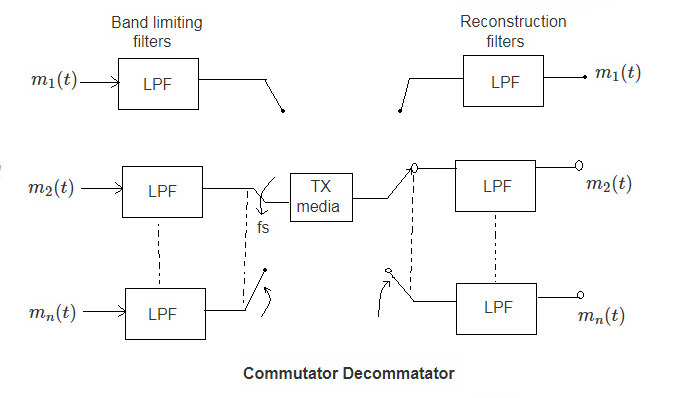 The switching arrangement at the Tx is provided by the commutator circuit, in each one of its rotation, the commutator extracts or samples, one sample from each message, input $m_1(t), m_2(t)----m_n(t)$

Thus, at the output of commutator we get PAM waveform which contain the samples of messages input which are periodically inter placed in time.

These multiplexed message samples are transmitted over the communication channel.

At the recovery end decommutator is used which distributes the pulses to different receiver. the decommutator is again a switching arrangement at the receiving end, similar to that of the transmitting end.

This decommutator is used to separate various received samples and to distribute them to an assembly of LPFs. The LPF then re construct the individual messages, $m_1(t), m_2(t)----m_n(t)$ at the output.