Resistance of armature is very small.

Hence, armature current $I_a$ will be very large if the armature is directly connected across the rated voltage supply. 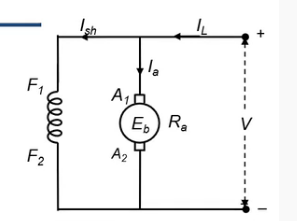 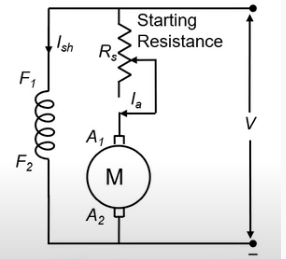 Excessive starting current will blow out the fuses and before that it may damage the commutator, brushes etc.

The performance of other loads connected to the same line may also get affected due to the large voltage drop in the line.

To avoid this a variable resistance is introduced in the armature during starting period.

With starting resistance Rs in series with armature, the starting current $ =\frac {V}{R_a+R_s} $

Therefore, the high starting current is limited to a safe value.

Starting period is about 5 to 10 seconds depending on the size of motor.

Once the motor is started the speed of motor N increases. Therefore Ep increases and armature current decreases.

The starting resistance Rs is gradually cut out of the armature circuit as the motor gains speed and finally it is reduced to zero. 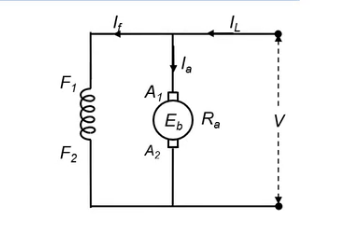 However, very small motors may be started directly by connecting them to supply lines because of the following reasons:

1) These motors have a relatively higher resistance, hence their starting current is not so high.

2) They have low moment of inertia, hence their speed increases quickly. 3) The starting current drawn by these motors is not sufficient to produce a large drop in line voltage. 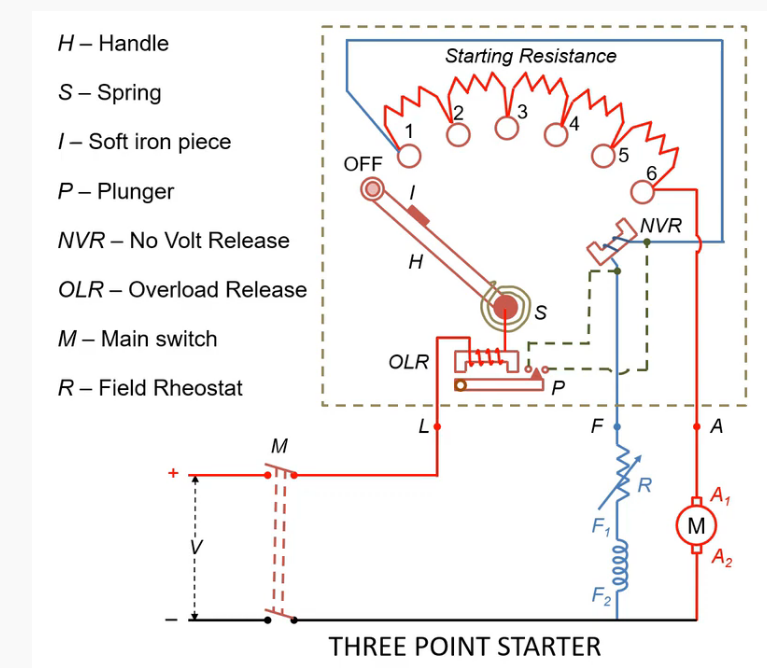 The normal function of the hold-on coil is to hold on the starting arm in the final running position when the motor is under normal operation.

Whenever the supply fails or disconnected or if the supply voltage becomes low, the handle should return to its OFF position to prevent direct connection of armature when the supply restores again.

Whenever the field circuit becomes open, the starting arm immediately springs back to the OFF position. The motor gets disconnected from supply and its operation of motor at dangerously high speed is prevented

If the motor becomes overloaded beyond a certain pre-determined value, the electromagnet of overload release gets more magnetized. It attracts the plunger P and the NVR coil gets short circuited.

Due to demagnetization of NVR coil, the starter arm returns to its OFF position and the motor is protected against overload.

If the motor is to be stopped, open only the main switch. If starter arm remains in the final position, full voltage will be applied across the armature when the supply is switched 'ON' again.

The current in holding coil will reduce to zero and results in demagnetization of NVR coil. The starter arm returns to its OFF position and the motor is disconnected from supply.

To run the motor at high speed, the field current must be reduced to a low value by inserting high resistance in the series field winding.

This difficulty can be overcome by using a four point starter.