Assumptions made in the derivation are:

Consider each tooth as a cantilever beam loaded by a normal load (F) as shown in fig below and maximum stress is induced at 'a', is given by

h = Length of the tooth,

b = Width of gear face

Where t and h are the functions of circular pitch $(\text { Pc })$ hence, substituting and simplifying t and h in terms of $P_{c}$ using constant.

The constant 'y' is called as Lewis form factor and it is independent of the size of the tooth and depends only on the number of teeth on gear and the system of teeth. For example,

Beam strength of gear must be greater than Lewis dynamic load for safe design.

The allowable bending strength $(F_s)$ of a gear is defined as the allowable tangential force at the pitch circle based on the mutually allowable root stress of two meshing gears under load.

Drawbacks of Lewis equation are:

The velocity factor is used to make approximate allowance for the effect of dynamic loading. The dynamic loads are due to the following reasons: 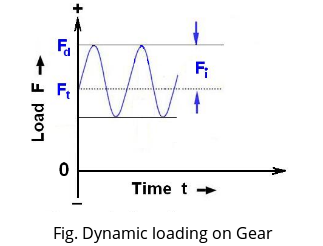 The maximum load that gear teeth can carry, without premature wear, depends upon the radii of curvature of the tooth profiles and on the elasticity and surface fatigue limits of the materials.

Wear strength of gear must be greater than Lewis and Buckingham dynamic load for safe design.