The Model (Log-distance Path Loss ) in equation 2 does not consider the fact that the surrounding environmental clutter may be vastly different at two different locations having the same T-R separation.

This leads to measured signals which are vastly different than the average value predicted by Equation 2 in Log-distance Path Loss model.

Measurements have shown that at any value of d , the path loss $P L(d)$ at a particular location is random and distributed log-normally about the mean distance-dependent value. That is

where $X_{\sigma}$ is a zero-mean Gaussian distributed random variable with standard deviation $\sigma$.

The log-normal distribution describes the random shadowing effects which occur over a large number of measurement locations which have the same T-R separation, but have different levels of clutter on the propagation path.

In practice, the values of $n,$ and $\sigma$ . are computed from measured data, using linear regression such that the difference between the measured and estimated path losses is minimized in a mean square error sense over a wide range of measurement locations and T-R separations.

An example of how the path loss exponent is determined from measured data follows. Figure below illustrates actual measured data in several cellular radio systems and demonstrates the random variations about the mean path loss (in $\mathrm{dB}$ ) due to shadowing at specific T-R separations.

since $P L(d)$ is a random variable with a normal distribution in $\mathrm{dB}$ about the distance- dependent mean, so is $P_{r}(d),$ and the $Q,$ -function or error function (erf) may be used to determine the probability that the received signal level will exceed (or fall below) a particular level. The $Q,$ -function is defined as

Similarly, the probability that the revived signal level will be below $\gamma$ is given by 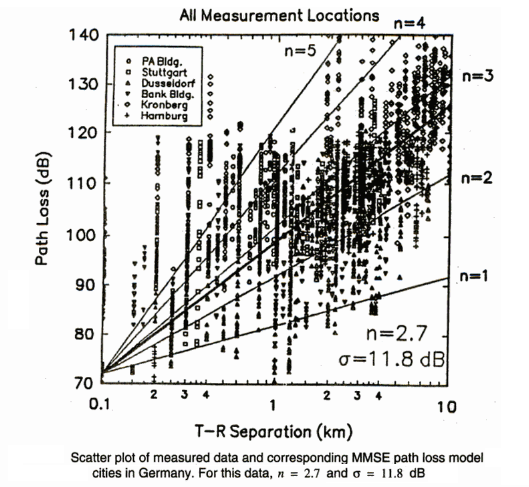