A system is defined as a quantity of matter or region in space chosen for the thermodynamic study. the mass or region outside the system is called the surroundings. 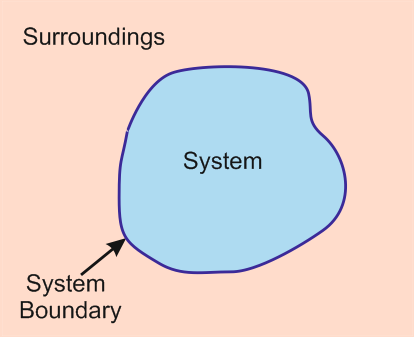 the real or imaginary surface that separates the system from its surroundings is called boundary. the boundary of a system can be fixed or movable. mathematically speaking, the boundary has zero thickness and thus it can neither contain any mass nor occupy any volume in space.

1. Control Mass Mass is fixed by its quantity & identity. No mass can enter or leave the system. but the energy in the form of heat or work can cross-boundary. volume may change. 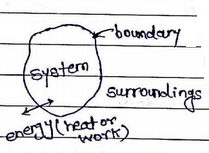 No mass transfer ex: the mass of gas or vapour contained in an engine cylinder. 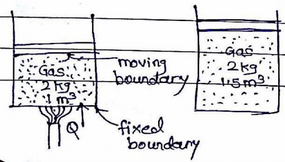 2.Control Volume. Matter, as well as energy(heat, work), can cross-system boundary. The boundary of an open system is called control surface & they can be real, imaginary. 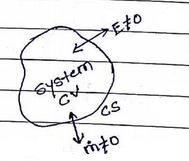 ex: most of engg. devices

No interaction between system &surrounding. fixed mass & energy. No mass or energy. Transfer across the system boundary.

Other examples of a closed system: lead-acid battery, weight on pre. cooker, refrigerator when its door is closed, a coil spring in an automobile, electric bulb, the air in football in play, a satellite orbiting earth.