A system is said to be exist in a state of thermodynamic euilibrium when no change in anymacroscopic property is registered, if the systrem is isolated from its surroundings. thermodynamic studies mainly the properties of physical systems that are found in equilibrium states. to be in thermodynamic EQUILIBRIUM IDEALLY SPEAKING SYSTEM SHOULD be isolated or in a dead state. 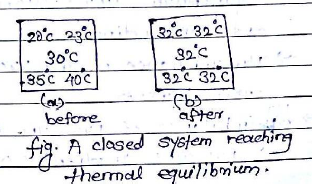 A system will be called in a state thermodynamic equilibrium if the conditions for the following three types of equilibrium are satisfied.

The thermal equilibrium will be attained if both system and surrounding reach to the same temperature to stop further heat flow.

In absence of any unbalance force within the system itself or between system and surrounding the system is said is said to be in a state of mechanical equilibrium.