In TDMA, the entire radio spectrum is divided into time slots and in each slot only one user is allowed to transmit or receive. Each user gets a cyclically repeating slot. When one user is transmitting it’s information, the other users have to buffer their data i.e. TDMA users have to transmit data in a buffer and burst method, thus the transmission for any user is non-continuous. 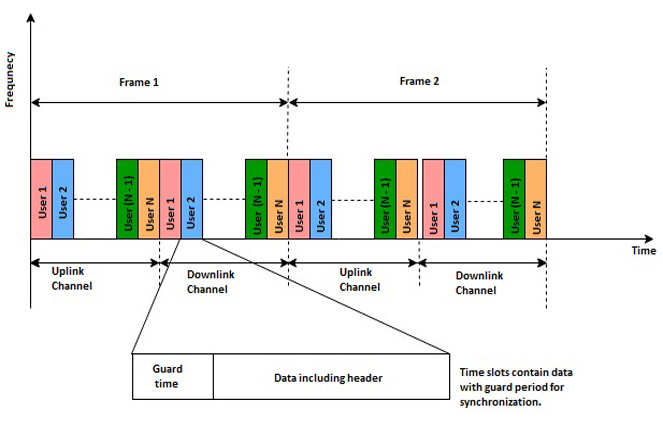 As shown in Figure 3, A particular user gets time slots which are non continuous in nature. The next time slot is assigned to him/her only when the other users sharing the same spectrum have each done one burst of transmission atleast. Collection of time slots which are assigned to unique users is called as a Frame. In other words, a user gets only one time slot per frame to transmit. In TDMA/TDD, half of the time slots in the frame would be used for forward link and the other half would be used for reverse link. In TDMA/FDD systems, since two separate physical channels exist, transmit and receive frames are different and on different carrier frequencies.

The technical definition of the TDMA system is given as,

“TDMA is an assigned frequency band shared among a few users. However, each user is allowed to transmit in predetermined time slots. Hence, channelization of users in the same band is achieved through separation in time. (Qualcomm, 1997)”

Efficiency of a TDMA FRAME

Frame efficiency can be expressed as,

Number of channels In TDMA system:

Where, $m :$ The maximum number of TDMA users supported on each radio channel.

If a normal GSM time slot has 40.25 overhead bits and 116 data bits. Calculate the frame or time slot efficiency.

Figure 4(b) shows an implementation of FDMA/TDMA/TDD systems. It was used in the PAN –European digital PCS standard DEC. As, the distances are short, a TDD format allows using the same frequency for forward and reverse operation.

Depending on how the available bandwidth is allocated to the users, FDMA and TDMA techniques can be classified as narrowband and wideband systems.

Systems operating with channels substantially narrower than the coherence bandwidth are called as Narrowband systems. Duplexing techniques normally used in these systems are FDD. These types of systems are called as FDMA/FDD. To minimize the interference between the forward and reverse channels, the frequency separation between the two is made as large as possible. Narrowband TDMA allows users to use the same channel but allocates a unique time slot to each user on the channel, thus separating a small number of users in time on a single channel. These systems can use either TDD or FDD and each channel is shared using TDMA. Such systems are called TDMA/TDD or TDMA/FDD.

In wideband systems, the transmission bandwidth of a single channel is much larger than the coherence bandwidth of the channel. Thus, multipath fading doesn’t greatly affect the received signal within a wideband channel, and frequency selective fades occur only in a small fraction of the signal bandwidth. Most of the TDMA and CDMA systems which allow many users in the same bandwidth, fall under this category. Either FDD or TDD duplexing techniques can be used.