Spread spectrum is a means of transmission where the data occupies a larger B.W than necessary. Thus the spectrum is ‘spread’. The development of SSMA dates back to early 1950s when it was used to establish a secure communication without any eavesdropping between military groups. SSMA provides immunity to multipath interference and it is a very robust multiple access technique.

There are mainly two types of SSMA techniques given as,

FHMA is the conventional SSMA technique. In FHMA , the carrier frequencies of the individual users are varied in a pseudorandom fashion within a wideband channel.

Figure 5 illustrates how FHMA allows multiple users to occupy same channel at the same time without any interference. The spectrum allotted is first divided into narrow subchannels. As shown, the digital data of each user is broken into uniform sized bursts which are transmitted on different frequency channels within the allocated spectrum band. The next burst by the same user is transmitted on a different frequency channel. This pseurandom change of subchannels by each user after specific time interval allows many users to transmit over the same spectrum.

Thus FHMA can be defined as ‘A spread spectrum multiple access technique in which the carrier hops randomly from one frequency to another’.

At any given point in time, a frequency hopped signal only occupies a single , relatively narrow channel since narrowband FM or variations of FSK is used. Hence, we need to consider the rate of hop in relation to the symbol rate of data. Some basic terminologies used in FHMA are given as under:

i) Hopset: The set of possible carrier frequencies over which the transmitter can change its carrier frequency is called as Hopset. Each channel is defined as a spectral region with a central frequency in the hopset and a bandwidth large enough to include most of the power in a narrowband modulation burst having the corresponding carrier frequency.

ii) Instantaneous Bandwidth: The bandwidth of a channel used in the hopset at that instant. It is denoted by $B.$

iii) Total hopping Bandwidth: The Bandwidth of the spectrum over which the hopping occurs. It is denoted by $B_{ss.}$

iv) Hop Duration: The time duration between the hops is called as the hopping period or the hop duration and is denoted by $T_h.$

v) Processing Gain: The ratio of total hopping bandwidth ($B_{ss}$) and instantaneous bandwidth ($B)$ is called processing gain. It is expressed as,

It denotes the amount of spreading that the signal has to encounter in the process of FHMA.

a) Fast Frequency Hopping: If the rate of change of carrier frequency $(R_{h})$ is greater than the symbol rate $R_{s}$, then the system is referred to as fast frequency hopping system. That is, the carrier frequency will hop or change several times during transmission of one symbol. Usually $R_h$ is an integer multiple of $R_s$.

b) Slow Frequency Hopping: If several symbols are transmitted on each frequency hop then the system is referred as slow frequency hopping system. i.e.$R_{s}$ is an integer multiple of $R_h$.

Figure 5 shows the transmitter of a frequency hopped system with single channel modulation. The incoming data is first applied to a digital modulator.

The main component of FH modulator is a PN code generator which generates a pseudo random code at periodic intervals. This output is fed to a frequency synthesizer and the different carrier frequencies are generated according to the incoming code. The outputs of modulator and frequency synthesizer are fed to the mixer for multiplication. The mixer produces sum and difference frequency components as, $f_{c} + f_{m}$ and $f_{c} - f_{m}$, which are passed through next stage of mixer. It is band pass filter although not shown in the block diagram. This filter is designed to select the sum frequency component $f_{c} + f_{m}$. Depending upon the code clock, PN code changes and hence the carrier frequency. Thus the digital data is modulated to different carrier frequency and frequency Hopped signal is generated.

FH bandwidths can also be of the order of several GHz. An implication of these large FH bandwidths is that coherent detection is possible only within each hop, because frequency synthesizers are unable to maintain phase coherence over successive hops.

Hence most of the Frequency hop communication systems use non-coherent M-ary modulation schemes.

The incoming frequency is fed to a wideband filter that will pass the entire hopset. The frequency hopping is first removed by mixing (down converting) the received signal with output of a local frequency synthesizer that is synchronously controlled in the same manner as that of transmitter. The resulting output is then band pass filtered, and processed by a non coherent demodulator.

Let us assume that the modulation used is M-ary FSK on the transmitter side. An individual FH/MFSK tone of shortest duration is referred to as chip. The chip rate $R_c$ for an MFSK system is defined by $R_c = max(R_h, R_s)$, where,$R_h$ is the hop rate and $R_s$ is the symbol rate.

In a CDMA system, the narrowband message signal is multiplied with a very large bandwidth signal called as the spreading signal. The zeroes and ones of this spreading signal are called chips. It is basically a pseudo noise code sequence that has a chip rate which is very high as compared to the data rate of the message. This PN code is unique for every user. This PN code is orthogonal to the other codes, hence interference between users is minimized. With this arrangement, many users can use the same carrier frequency and can transmit simultaneously. The receivers need to know the code word of the corresponding sender to detect it.

Figure 7 shows the DSSS transmitter system. As shown in Figure 7, the message signal is directly modulo-2 added with the PN code.

The process of coding can be explained as follows as illustrated in Figure 8, 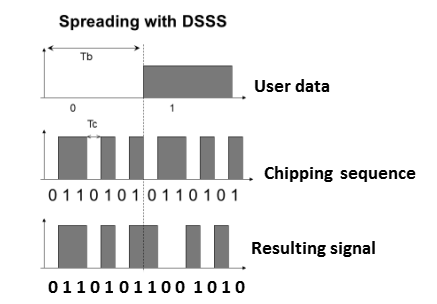 Figure 8: The coding process in DSSS

Suppose, the user data m(t) is 0 and 1. let us assume that a 7 chip length code (chipping sequence) of 0110101 is repetitively used. Modulo 2 addition ( XOR operation ) is performed on the PN code p(t) with each bit of the data to be sent.

A direct sequence spread spectrum signal $S_{ss}(t)$ is received and fed to a wideband filter.

The received spread spectrum signal $S_{ss}(t)$ for a single user can be represented as, 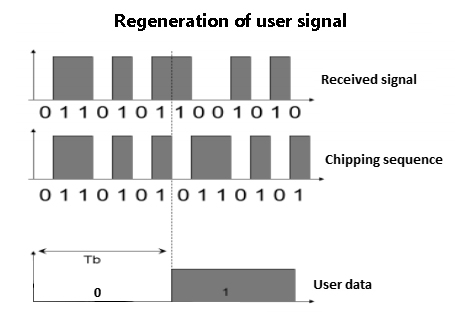 Figure 10: Decoding of the user data on the receiver side

As shown, the resultant in Figure 10, $m(t)$ is same raw data bits 0 and 1. Since DSSS is a coherent transmission and detection process, the synchronization system accepts the input from the received signal to synchronize the demodulator and the PN code generator. Lastly the signal is demodulated and the desired signal is obtained.

Figure 11 shows the spectrum of the received signal and the interference at the output of the receiver wideband filter. As seen the desired signal's spectra is quite spreaded.

Figure 11: Spectrum of desired received signal with interference a) interference at the output of received wideband filter b) signal after multiplying with the PN code

After Multiplication with PN code, the signal bandwidth is reduced to $B$, while the interference energy is spread over an RF bandwidth exceeding $B_{ss}$. The filtering action of the demodulator removes most of the interference spectrum that does not overlap with the signal spectrum. Thus, most of the original interference energy is eliminated by spreading and minimally affects the desired receiver signal. The ratio $B_{ss}/B$ gives an approximate measure of the interference rejection capability of the system. This is also expressed as processing gain ($PG$) and can be defined as, $$PG = \frac{T_s}{T_c} = \frac{R_c}{R_{s}} \frac{B_{ss}}{2R_{s}}$$

Performance of CDMA System in a Multiuser Environment 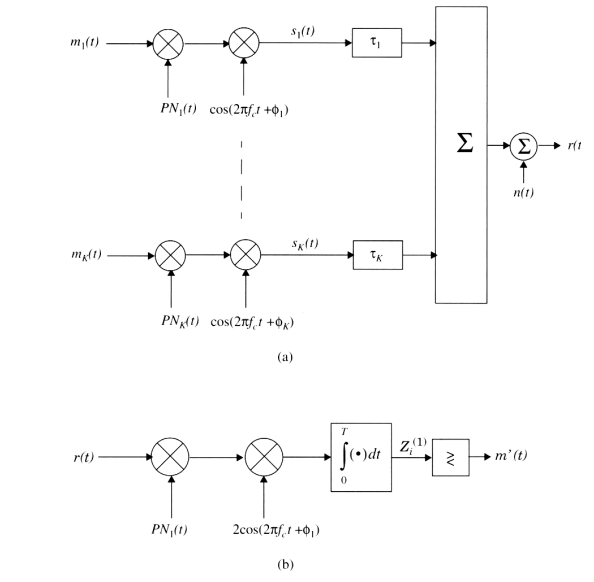 Figure 12: A simplified diagram of DSSS system with K users. a) A model of CDMA transmitters with K users; b) receiver model for user 1

Assuming that there are K users in the system. Base Station has to transmit unique data to each of them simultaneously on the same channel. As shown in the Figure 12, message for user i will be multiplied $i^{th}$ PN code, where $( i = 1, 2...., K )$. In this way, each specific user is allocated a specific code. The coded data sequences then modulates a single high bandwidth carrier frequency. Corresponding delays are introduced to each coded stream, all are then summed up and transmitted together. Data for different users will not interfere with each other during propagation as the codes are orthogonal to each other.

$\quad$ Self-jamming: When the spreading sequences of different users are not exactly orthogonal, this becomes a hindrance on the receiver side while detecting the signals.

$\quad$ Near-far problem: It occurs at a CDMA receiver, if an undesired user which is probably closer to the receiver has a high detected power compared to the far away desired user. Since both the users are transmitting at the same frequency, the receiver may be dominated by the nearby receiver