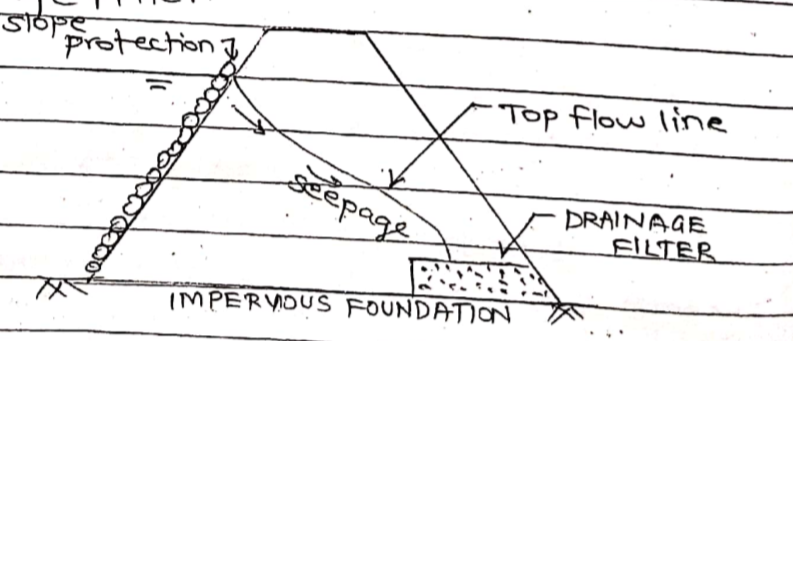 CAUSES OF FAILURE OF EARTHERN DAM

The essential requirements of the design of an earth dam are safe and stable structure at a minimum construction and maintenance cost. The essential design criteria are (i) Safe against overtopping during design flood by providing adequate\spillway and outlet capacity,(ii) Spillway be of sufficient capacity to pass peak flood by providing adequate spillway and outlet capacity to pass peak flood,(iii) Safe against overtopping by wave action providing adequate free board, (iv) Side slopes stable during construction and under all conditions of reservoir operation. Upstream slope is safe against rapid drawdown conditions while the downstream slope is safe against sloughing, (v) Side slopes upstream and downstream are flat enough so that the shear stress-induced in the foundation is within the shear strength of the material comprising the foundation with a suitable factor of safety, (vi) Upstream slope is protected against erosion by wave action while the crest and downstream slope is protected against erosion due to wind and rain. Horizontal berms at suitable intervals in upstream and downstream faces may be provided for this purpose, (vii) Downstream slope is safe during steady seepage under full reservoir condition, (viii) Portion of the dam downstream of the impervious core is properly drained by the provision of suitable drainage System, (ix) Seepage flow through the dam and foundation is so controlled that there is no danger of fine particles getting washed out from the downstream by the efflux of seepage. Moreover, quantity of seepage loss is restricted to the minimum, (x) There is no possibility of free flow of water from upstream through either the dam or the foundation, (xi) Adequate impervious core to act as water barrier. Top of impervious core is maintained higher than the maximum reservoir level,(xii) Seepage line, i.e., phreatic line is well within the downstream face so that no sloughing of the slope takes place, (xii) Seepage flow through the embankment, foundation and abutments is controlled so that no internal erosion takes place. The amount of ater lost through seepage must be controlled so that it does not interfere with planned project functions, (xiv) Transition filters are incorporated to satisfy the two essential conditions of filters, viz., to prevent choking of the filter by soil and have minimum of head loss in the filter, (xv) Dam as a whole is earthquake resistant. The seismic conditions of the region investigated with reference to geological map of vicinity. India has been divided into five sesmic zones. Horizontal seismic coefficient for static in different zones, is taken as under:

Seepage In Earth Dams In earth dam, the entire dam, except for the core, forms part of the drainage system. Filters, made of select materials, allow the water to pass through and in turn the transition zones do the same thing with respect to the filers. Finally, the shells are draining elements and the filtered water is channelled through them downstream shell. Those from the abutments are channelled to the river bed in order to avoid surface erosion.
Seepage through the earth dams is unavoidable. The reservoir water seeps through the body of the dame or through its contact with foundation and abutments. The adverse effects of seepage in earth dame are

In this method, two electrodes are placed side by side in the water at one edge of the reservoir so that they are at zero potentials. To begin measurements, while one electrode is kept in that position, the other is moved to the remote shore and its potential relative to the stationary electrode is measured at that point and at regular intervals as it is drawn across the bottom of the reservoir towards the stationary electrode. The process is repeated from a number of different points around the shore so that a potential grid of the reservoir bottom is derived. Zones of maximum potential are indicative of seepage.\

Seepage Control Measures
The purpose of seepage control is to (i) Contribute to the stability of the dams and their foundations, (ii) Effect reduction of the loss of water, (iii) Avert failure of the dam structure by piping, and (iv) Excessive pore pressure in the dam. A Suitably designed internal drainage system is essentially required to meet these requirements. 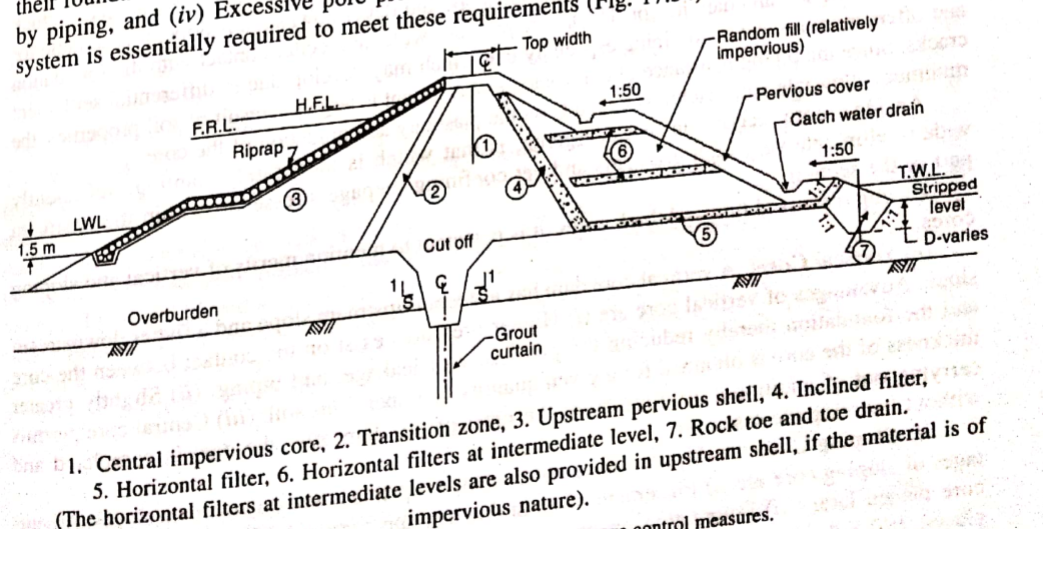