Apart from the normal traffic burst, the time slots which carry the logical channels have a different structure which is as shown in Figure 9. 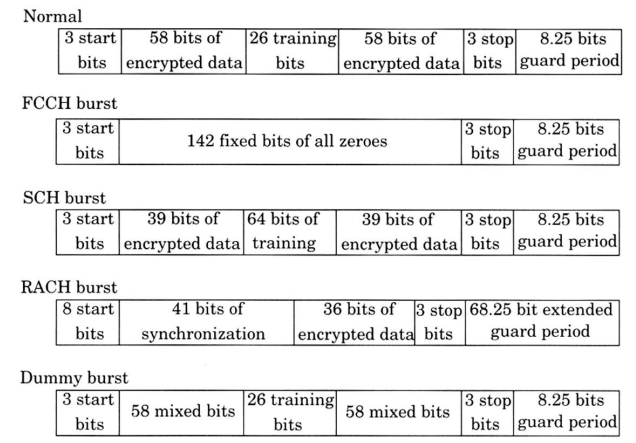 In Figure 9, it is to be observed that FCCH burst is just a fixed bit stream of zeroes. That means only the raw carrier frequency is transmitted as an FCCH burst. SCH burst carries important information about time and frame synchronization for all mobiles, hence it has more number of training bits, so that even if the channel conditions are worse, this burst is correctly read by all the Mobile stations in the area. During the non-peak hours, if BTS does not have to transmit anything, it starts transmitting dummy bursts just to keep continuity of transmission. (Switching off all the transmission circuitry and then switching it ON again is more power consuming. Hence continuous transmission is preferred.)

It also allows an approximate estimation of the distance of the MS from BTS. The distance can be computed from the arrival time of the RACH burst.