During a call speech signal has to be digitized, coded, formatted , modulated and then transmitted on wireless media. The entire signal processing flow is discussed as follows: 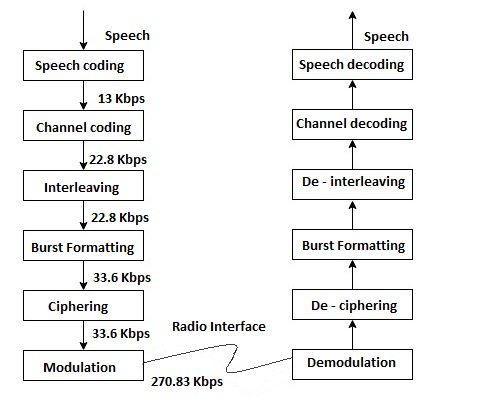 i) Speech Coding: The users voice signal is fed to a speech coder.The GSM speech coder is based on the Residually Excited Linear Predictive Coder (RELP), which is enhanced by including a Long-Term Predictor (LTP). The coder provides 260 bits for each 20 ms blocks of speech, which yields a bit rate of 13Kbps. Scope for using half-rate coders are included in the specifications. The GSM speech coder takes advantage of the fact that in a normal conversation,each person speaks on average for less than 40$\%$ of the time, By incorporating a voice activity detector (VAD) in the speech coder, GSM systems operate in a Discontinuous Transmission mode (DTX) which provides a longer subscriber battery life and reduces instantaneous radio interference since the GSM transmitter is not active during silent periods. A comfort noise subsystem (CNS) at the receiving end introduces a background acoustic noise to compensate for the annoying switched muting which occurs due to DTX.

ii)TCH/FS, SACCH, and FACCH Channel Coding: The output bits of the speech coder are ordered into groups for error protection, based upon their significance in contributing to speech quality. Out of the total 260 bits in a frame,the most important 50 bits, called type 1a bits, have 3 parity check (CRC) bits added to them. This facilitates the detection of non-correctable errors at the receiver. The next 132 bits along with the first 53 (50 type 1a bits + 3 parity bits) are reordered and appended by 4 trailing zero bits, thus providing a data block of 189 bits. This block is then encoded for error protection using a rate 1/2 convolutional encoder with constraint length K = 5, thus providing a sequence of 378 bits. The least important 78 bits do not have any error protection and are concatenated to the existing sequence to form a block of 456 bits in a 20 ms frame (Readers should note that this frame consists of data emerging from one user). The error protection coding scheme increases the gross data rate of the GSM speech with channel coding, to 22.8 kbps. This error protection scheme is shown in Figure 11. 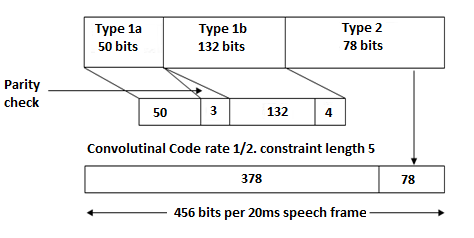 iii) Interleaving: Interleaving is done to ensure that successive and continuous data is not sent on consecutive time slots, in order to minimize the effect of sudden fades on the received data. Diagonal interleaving is used to send GSM speech signals. In this process, the total of 456 encoded bits within each 20 ms speech frame or are broken into eight 57 bit sub-blocks. These eight sub-blocks which make up a single speech frame are spread over eight consecutive eight consecutive frames for a specific TS). 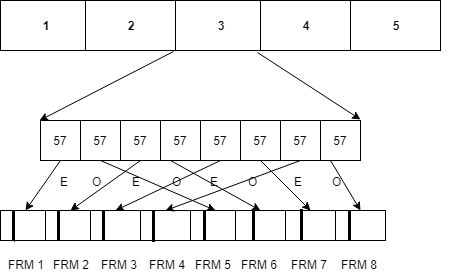 The 57 bits sub-blocks made out of 1 speech frame are termed as ‘even’ and ‘odd’ parts. Suppose TS 5 has been allotted to the user, then the even parts of the sub-blocks are mapped to the TS5 of first 4 frames.Thus the even parts of the same speech frame are transmitted first. The odd parts are then mapped to TS5 of the next 4 frames and transmitted. In a TS structure, there are two fields for payload. The first field contains even part of current speech frame (57 bits) and second field contains odd part of previous speech frame Thus, if a burst is lost due to interference or fading, channel coding ensures that enough bits will still be received correctly to allow the error correction to work.

iv) Burst Formatting: After interleaving, the midamble bits, staeling bits, head and tail bits have to be mapped to the TS . This is called as burst formatting. Burst formatting adds binary data to the ciphered blocks, in order to help synchronization and equalization of the received signal.

v) Ciphering: Ciphering modifies the contents of the eight interleaved blocks through the use of encryption techniques known only to the particular mobile station and BTS. Security is further enhanced by the fact that the encryption algorithm is changed from call to call. Two types of ciphering algorithms, called A3 and A5, are used in GSM to prevent unauthorized network access and privacy for the radio transmission respectively. The A3 algorithm is used to authenticate each mobile by verifying the users passcode within the SIM with the cryptographic key at the MSC. The A5 algorithm provides the scrambling for the 114 coded data bits sent in each time slot.

vi) Modulation: GSM uses GMSK as a modulation format. GMSK is a variant of Minimum Shift Keying (MSK);the difference is that the data sequence is passed through a filter with a Gaussian impulse response(time bandwidth product BT = 0.3). GMSK was chosen for the original GSM system for a variety of reasons:

The GMSK modulation format is used for the lower data rate transfers. The advantages mean that it is well suited for situations where lower data rates can be tolerated.It has advantages in terms of spectral efficiency as well as having an almost constant amplitude which allows for the use of more efficient transmitter power amplifiers, thereby saving on current consumption, a critical issue for battery power equipment. It gains its name from the fact it is filtered using a Gaussian filter.

This filtering is rather hard. Therefore, the spectrum is rather narrow, but there is a significant amount of Inter Symbol Interference (ISI). On the other hand, the ISI due to delay dispersion of the wireless channel is usually much more severe. Thus, some kind of equalization has to be used anyway.

Frequency Hopping: Under normal conditions, each data burst belonging to a particular physical channel is transmitted using the same carrier frequency.However, if users in a particular cell have severe multipath problems,the cell may be defined as a hopping cell by the network operator, in which case slow frequency hopping may be implemented to combat the multipath or interference effects in that cell. Frequency hopping is carried out on a frame-by-frame basis, thus hopping occurs at a maximum rate of 217.6 hops per second. As many as 64 different channels may be used before a hopping sequence is repeated. Frequency hopping is completely specified by the service provider.

Equalization: Equalization is performed at the receiver with the help of the training sequences transmitted in the midamble of every time slot. The type of equalizer for GSM is not specified and is left up to the manufacturer.

Demodulation: The portion of the transmitted forward channel signal which is of interest to a particular user is determined by the assigned TS and ARFCN. The appropriate TS is demodulated with the aid of synchronization data provided by the burst formatting. After demodulation, the binary information is deciphered, de-interleaved, channel decoded, and speech decoded.