Outlet works compromise discharging facility for conveyance of water from a dam for power generation and irrigation. Outlet work for power generation is termed as pen-stock and that as a means for releasing water to meet the demand of irrigation water downstream is called irrigation outlet. Outlet works serve to regulate the releases at a retarded rate as per downstream needs or a combination of multipurpose requirements such as releasing surplus inflows in conjunction with spillway if the outlet empties downstream into a river. The outlets are usually placed sufficiently below minimum reservoir level to provide necessary head for effecting flows. Occasionally the outlet may be placed at a higher level to deliver water to a canal. The irrigation outlet capacities are determined from reservoir operation studies , based on the consideration of a critical period of low runoff when reservoir storage's are low and daily irrigation demands are at its peak. In a multipurpose reservoir, the irrigation outlets are operated rarely, the release being usually made through pen-stocks to serve for power generation as well as to meet irrigation demand.

The layout of the irrigation outlets is influenced by various considerations relating to the hydraulic requirements, site adaptability, the interrelationship of the outlet works to the diversion requirement during construction and other appurtenant works of the dam. An outlet work for a low dam may consist of an open channel or cut and cover structure placed at the dam embankment. For a low earth fill dam, the outlet may consist of single or multiple units of buried pipes placed through or under the dam embankment. For a high earthen dam, the outlet is usually carried through, under or around the dam as a cut and cover conduit or through the abutment as a tunnel. For a concrete dam, the outlet work is usually carried through the dam as a formed conduit or a sluice or a pipe embedded in the concrete mass. The irrigation outlet tunnel like pen-stocks tunnels, usually compromise intake structure, tunnel with gated control, stilling basin and exit channel.

In earthen dam, the simple type is 900 mm minimum diameter pipe so as to permit entry of a man into it or clearance. Projecting collars are provide to increase the length of seepage path by at-least 25 percent in order to reduce the seepage along the outside of the conduit. Thus if N is the number of collars and P is the projection of each collar, 2 NP is greater than L/4, where L is the length of the sluice-way from upstream to downstream end. In order to limit the hydraulic losses to the minimum, the interior surface of the sluice-way pipe of tunnel is made smooth and free from any projections or cavities and suitably painted. The entrance to an irrigation tunnel is designed to produce an acceleration similar to that in a jet issuing from a sharp edged orifice. The surface is formed to natural contraction curve and the tunnel is assumed to the size of orifice jet at its maximum contraction. The normal contraction with coefficient of contraction $C_c$ as 0.6 and 0.7 is used in high head and low head installations respectively in order to reduce the height of opening. The coefficients of discharge and loss coefficients for typical entrances for conduits are as given in Table 20.1. 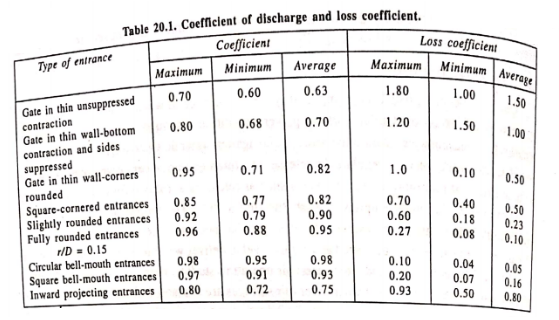 For square or rectangular conduit:

$K_c$ = loss coefficient depending on pipe material and interior condition of pipe.

3. Bend loss. The bend loss can be calculated from the formula:

Where, $h_b$ = is head loss resulting from bend and K is bend loss coefficient. In case of pipes it depends on shape of bend, deflection angle and ratio of radius of ben to pipe diameter.

5. Exit loss. When no recovery of velocity head will occur, i.e. when the release from a pressure conduit discharge freely, or is submerged or supported on downstream from exit,