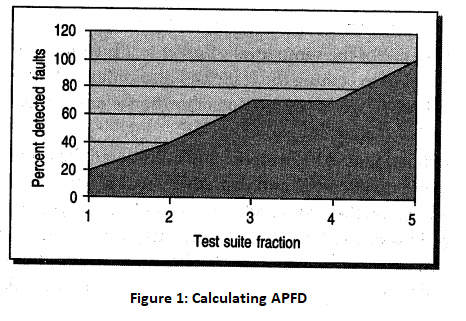 APFD is calculated as given below.

n is the total number of test cases in T

Elbaum et al. modified their APFD metric and considered these two factors to form a new metric which is known as cost cognizant APFD and denoted as $APFD_c$. In $APFD_c$, the total cost incurred all the test cases is represented on the x-axis and the total fault severity detected is taken on the y-axis.In is used to measure the various possibilities, for example, the test cost in terms of actual execution of test cases when the primary required resources are the machine and human time, and the monetary cost of execution and validation of test cases. $APFD_c$, is measured by the following formula.

where $t i$ is the cost associated with the test cases, $T F i$ the faults detected by the test cast cast $T i$ and $fi$ is the severities of detected faults. Thus, it measures the unit of fault severity detected per unit test case cost.