Basis path testing is the oldest structural testing technique. The technique is based on the control structure of the program. Based on the control structure, a flow graph is prepared and all the possible paths can be covered and executed during testing. Path coverage is a more general criterion as compared to other coverage criteria and useful for detecting more errors. However, the problem with path criteria is that the programs, which contain loops may have an infinite number of possible paths are and it is not practical to test all the paths. Some criteria should be devised such that selected paths are executed for maximum coverage of logic. Basis path testing is the technique of selecting the paths that provide a basis set of execution paths through the program.

The guidelines for effectiveness of path testing are discussed below:

The control flow graph is a graphical representation of control structure of a program. Flow graphs can be prepared as a directed graph. A directed graph $(V, E)$ consists of a set of vertices V and a set of edges E that are ordered pairs of elements of V. Based on the concepts of directed graph, following notations are used for a flow graph:

Node: It represents one or more procedural statements. The nodes are denoted by a circle. These are numbered or labelled.

Edges or links: They represent the flow of control in a program. This is denoted by an arrow on the edge. An edge must terminate at a node.

Edges or links: They represent the flow of control in a program. This is denoted by an arrow on the edge. An edge must terminate at a node.

Decision node: A node with more than one arrow leaving it is called a decision node.

Junction node: A node with more than one arrow entering it is called a junction node.

Regions: Areas bounded by edges and nodes are called regions. When counting the regions, the area outside the graph is also considered a region.

Since a flow graph is prepared on the basis of control structure of a program, some fundamental graphical notations are shown here (See Fig.1 ) for basic programming constructs.

Using the aforementioned notations, a flow graph can be constructed. Sequential statements having g as no conditions or loops can be merged in a single node. This is why, the flow graph is also known as decision-to-decision-graph or $D D$ graph.

Path: A path through a program is a sequence of instructions or statements that starts at an entry, junction, or decision and ends at another, or possibly the same, junction, decision, or exit. A path may go through several junctions, processes, or decisions, one or more times.

Path segment: A path segment is a succession of consecutive links that belongs to some path.

McCabe has given a measure for the logical complexity of a program by considering its control flow graph. His idea was to measure the complexity by considering the number of paths in the control graph of the program. However, even for simple programs, if they contain at least one cycle, the number of paths is infinite. Therefore, he/she considers only independent paths. 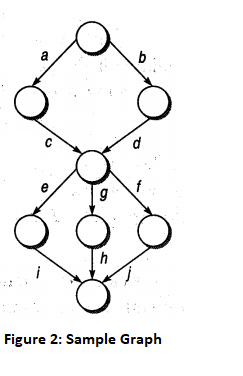 In the graph shown in figure 2, there are six possible paths, i.e. acei, acgh, acfj, bdei, bdgh and bdfj.

This is also known as Miller's theorem. We assume that a k way decision point contributes for $k-1$ choice points.

The program may contain several procedures also. These procedures can be represented as separate flow graphs. These procedures can be called from any point but the connections for calling are not shown explicitly. The cyclomatic number of the whole graph is then given by the sum of the numbers of each graph, It is easy to demonstrate that if p is the number of graphs and e and n are referred to as the whole graph, the cyclomatic number is given by

Formulae based on Gyclomatic Complexity:

Based on the cyclomatic complexity, the following formulae are being summarized.

Cyclomatic complexity number can be derived through any of the following three formulae.

The complexity number derived collectively will be the same as that calculated above. Thus

The following steps should be followed for designing test cases using path testing: