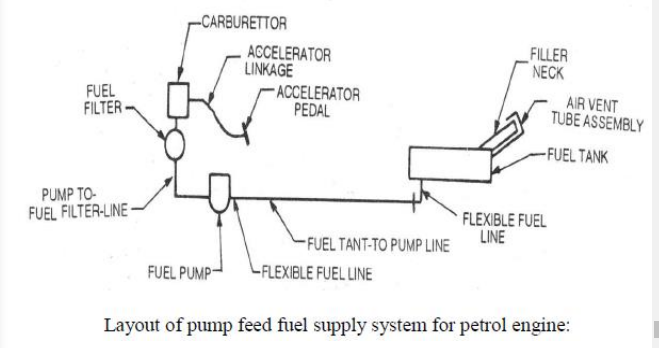 The pump feed system is shown in the figure above. Fuel tank is for storage of fuel located above the engine of two wheeler and in case of car located at backside of the car.In this system, a steel pipe carries the fuel to the fuel pump which pumps it into the float chamber of the carburetor through a flexible pipe. If the fuel pump is mechanical, it has to be driven from the engine camshaft and hence placed on the engine itself. However electrically operated pump can be placed anywhere. Fuel pump pressurize fuel and send it to the floating chamber of carburetor. Carburetor is placed before the inlet manifold and it serves the function of mixing petrol and air as per required ratio. It is mostly located at the rear in the fuel tank reducing the tendency of forming vapor lock. The system provides the fuel requirement at various engine speeds efficiently.