For an interference pattern to be observable,

Two sources are said to be coherent if waves from the sources have a constant phase difference between them.

Young’s Double Slit Experiment A simple experiment of the interference of light was demonstrated by Thomas Young in 1801. It provides solid evidence that light is a wave.

Interference fringes consisting of alternately bright and dark fringes (or bands) which are equally spaced are observed. These fringes are actually images of the slit. 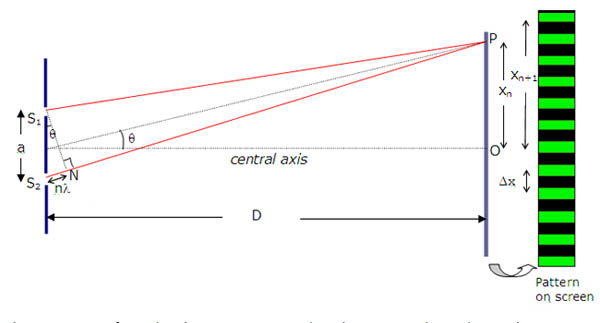 At O, a point directly opposite the mid-point between S1 and S2, the path difference between waves S2O – S1O is zero. Thus constructive interference occurs and the central fringe or maxima is bright.

Suppose P is the position of the nth order bright fringe (or maxima). The path difference between the two sources S1 and S2 must differ by a whole number of wavelengths.

As the distance D is very much larger than a, the path difference S2 P – S1 P can be approximated by dropping a perpendicular line S1 N from S1 to S2 P such that S1 P ≈ NP and

From geometry, S2N = a sin θ where a is the distance between the centres of the two slits.

Thus the separation between adjacent fringes (i.e. fringe separation) is,