Was searching for this answer... thanks :)

In the below figure , ABC represents the principal section of a glass-prism having ∠A as its refracting angle.

The refracted ray LM is incident on the face AC at the point M where $N_2$MO is the normal and $∠r_2$ is the angle of incidence. Since the refraction now takes place from denser to rarer medium, therefore, the emergent ray MN such that $∠i_2$ is the angle of emergence.

The figure below shows the prism ABC, placed in the minimum deviation position. If a plane mirror M is placed normally in the path of the emergent ray MN the ray will retrace its original path in the opposite direction NMLK so as to suffer the same minimum deviation dm. 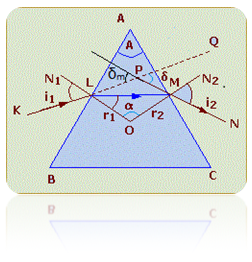 Hence, the ray which suffers minimum deviation possess symmetrically through the prism and is parallel to the base BC.

Since for a prism,

Thank you very much Just a quick question "❓ " you said that la=lm is it reasonable? I think not necessarily.