1 (a) (i) What are the practical applications of elliptical curve? (4 marks) 1 (a) (ii) Draw the involute of a square of side 25 mm.(6 marks) 1 (a) (iii) Draw a hyperbola given the distance of the focus from the directrix as 55 mm and eccentricity as 1.5.(10 marks) 1 (b) Draw plan, elevation and anyone side view choosing the most informative side as the front of the object shown below. 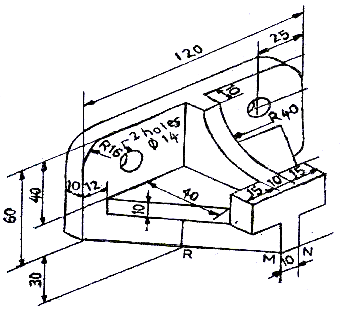 2 (a) The distance between the end projectors passing through the end points of a line AB is 60 mm. The end A is 15 mm above HP and 10 mm in front of VP. The end B is 35 mm in front of VP. The line AB appears 70 mm long in the front view. Complete the projections. FInd the true length of the line and its inclinations with HP and VP.(20 marks) 2 (b) A circular plate of 60 mm diameter has a hexagonal hole of 20 mm sides centrally punched. Draw the projections of the lamina resting on HP with its surface inclined at 30 degree to HP and the diameter through the point on which the lamina rests on HP is inclined at 50 degree to VP. Any two parallel sides of the hexagonal hole are perpendicular to the diameter of the circular plate passing through the point on which it rests. Draw the projection.(20 marks)

4 (a) A square prism of base side 30 mm and axis length 60 mm lies on the HP on one of its longer edges with its axis parallel to both HP and VP. It is cut by a vertical planes inclined at 45 degree to the VP. The cutting plane meets the axis at 15 mm from one end of the prism. Draw plane, sectional elevation and true shape of the section.(20 marks) 4 (b) A circular hole of diameter 30 mm is drilled through a vertical cylinder of diameter 50 mm and height 65 mm. The axis of the hold is perpendicular to the VP and meets the axis of the cylider at right angles at a height of 30 mm above the base. Draw the development of the lateral surface of the cylinder.(20 marks)

5 (a) A pentagonal pyramid of 40 mm edges of base and 70 mm height rests with its base on HP. One of the base edges is perpendicular to VP and lies on the left of the axis of the pyramid. A section plane perpendicular to VP and inchned at 30 degree to HP cuts the axis of the pyramid at a point 30 mm above the base of the pyramid. Draw the isometric view of the truneated pyramid.(20 marks) 5 (b) A hollow cylider of external diameter 60 mm internal diameter 40 mm and axis 80 mm long lies with its generator on ground with one of its circular ends touching the picture plane. The station point is 90 mm in front of the picture plane and 60 mm to the right of the axis of the view of the cylinder. The horizontal is 100 mm above ground. Draw the perspective view of the cylinder.(20 marks)