Reasons for having layered Protocols:

The reasons and advantages of using the network architecture are as follows: - It simplifies the design process as the functions of each layers and their interactions are well defined. - The layered architecture provides flexibility to modify and develop network services. - The number of layers, name of layers and the tasks assigned to them may change from network to network. But for all the networks, always the lower layer offers certain services to its upper layer. - The concept of layered architecture redefines the way of convincing networks. This leads to a considerable cost savings and managerial benefits. - Addition of new services and management of network infrastructure become easy. - Due to segmentation, it is possible to break complex problems into smaller and more manageable pieces. - Logical segmentation helps development taking place by different terms. 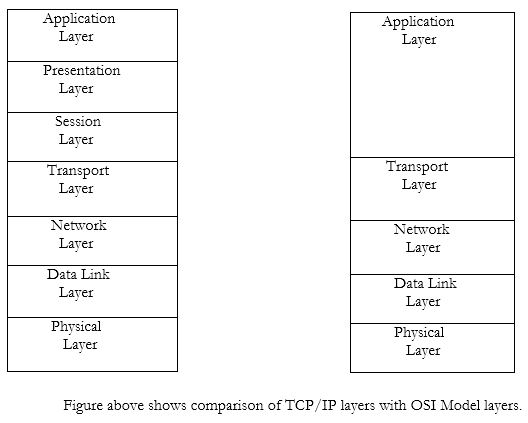 As seen from the figure it becomes clear that some of the layers functions are merged together and performed under the function of same layer. Also the network layer acts as the internetwork layer which has additional function in TCP/IP than in OSI. TCP/IP is a hierarchical protocol made up of interactive modules, each of which provides the specific functionality, however the modules are not necessarily interdependent. Whereas the OSI model specifies which function belongs to each of its layer, the layers of TCP/IP suit contain relatively independent protocols that can be mixed and matched depending on the needs of the system. At physical and data link layer TCP/IP does not define a specific protocol. It supports all the standards and propriety protocols. A network in the TCP/IP internetwork can be LAN or WAN. At the internetworking layer TCP/IP uses Internetworking Protocol where IP itself supports: ARP, RARP, ICMP and IGMP. IP is the transmission mechanism used by TCP/IP protocol. It is an unreliable and connectionless protocol a best effort delivery service. Where transmission takes place in the form of packets called as datagram. In TCP/IP transport layer is represented by two protocols: Transmission Control Protocol (TCP) and User Datagram Protocol (UDP). UDP is a process to process protocol that adds only port address, checksum error control and length information data from upper layer. TCP is the connection oriented transport protocol. It provides full transport layer services to the application. Application layer is equivalent of combination session, presentation and application layer of OSI model. Many protocols are defined in this layer.