A repeater is a device that operates only in the physical layer. Signals that carry information within a network can travel a fixed distance before attenuation endangers the integrity of the data. A repeater receives a signal and, before it becomes too weak or corrupted, regenerates the original bit pattern. The repeater then sends the refreshed signal. A repeater can extend the physical length of a LAN. The location of a repeater on a link is vital. A repeater must be placed so that a signal reaches it before any noise changes the meaning of any of its bits. If the corrupted bit travels much farther, however, accumulated noise can change its meaning completely. At that point, the original voltage is not recoverable, and the error needs to be corrected. A repeater placed on the line before the legibility of the signal becomes lost can still read the signal well enough to determine the intended voltages and replicate them in their original form.

An active hub is actually a multipart repeater. It is normally used to create connections between stations in a physical star topology. We have seen examples of hubs in some Ethernet implementations (lOBaseT, for example). However, hubs can also be used to create multiple levels of hierarchy, as shown in Figure. The hierarchical use of hubs removes the length limitation of 10Base-T (100 m). 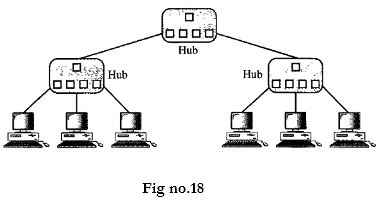 A bridge operates in the physical layer as well as in the data link layer. It can regenerate the signal that it receives and as a data link layer device, it can check the physical (MAC) addresses of source and destination contained in the frame. The major difference between the bridge and the repeater is that the bridge and the repeater is that the bridge has a filtering capability. That means it can check the destination address of a frame and decide if the frame should be forwarded or dropped. If the frame is forwarded, then the bridge should specify the port over which it should be forwarded. 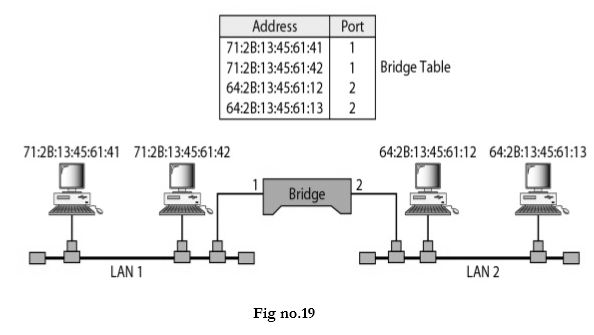 A router is a three-layer device that routes packets based on their logical addresses (host-to-host addressing). A router normally connects LANs and WANs in the Internet and has a routing table that is used for making decisions about the route. The routing tables are normally dynamic and are updated using routing protocols. Data is grouped into packets, or blocks of data. Each packet has a physical device address as well as logical network address. The network address allows routers to calculate the optimal path to a workstation or computer. 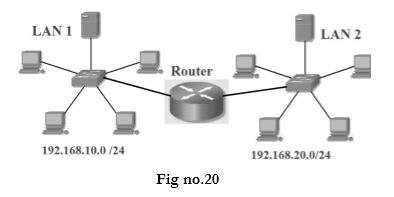 A gateway is normally a computer that operates in all five layers of the Internet or seven layers of OSI model. A gateway takes an application message, reads it, and interprets it. This means that it can be used as a connecting device between two internetworks that use different models. For example, a network designed to use the OSI model can be connected to another network using the Internet model. The gateway connecting the two systems can take a frame as it arrives from the first system, move it up to the OSI application layer, and remove the message.