Figure 6.1 shows a block diagram of the various components of a unidirectional WDM link.

The physical layer design must take into account the effect of a number of system impairments. Usually, impairment results in a power penalty to the system. In the presence of impairment, a higher signal power will be required at the receiver in order to maintain a desired bit error rate. One way to define the power penalty is as the increase in signal power required (in dB) to maintain the same bit error rate in the presence of impairments. Another way to define the power penalty is as the reduction in signal-to-noise ratio as quantified by the value of γ (the argument to the Q(.) due to a specific impairment.

Crosstalk is the general term given to the effect of other signals on the desired signal. Almost every component in a WDM system introduces crosstalk of some form or another. The components include filters, wavelength multiplexers/demultiplexers, switches, semiconductor optical amplifiers, and the fiber itself (by way of nonlinearities). Two forms of crosstalk arise in WDM systems: interchannel crosstalk and intrachannel crosstalk.

Sources of interchannel crosstalk. (a) An optical demultiplexer, and (b) an optical switch with inputs at different wavelengths.

Sources of intrachannel crosstalk. (a) A cascaded wavelength demultiplexer and a multiplexer, and (b) an optical switch. 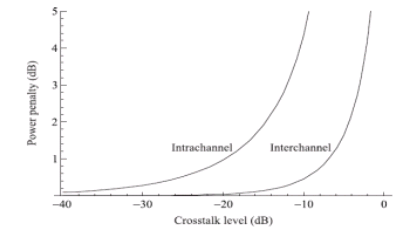 Intrachannel and interchannel crosstalk power penalties that are limited by thermal noise are shown as a function of crosstalk level, 10 log