Hough transform can be used for pixel linking and curve detection. The straight line represented by y=mx+c can be expressed in polar coordinate system as, 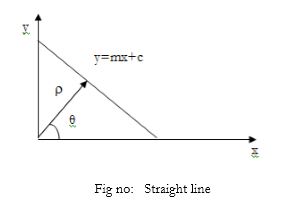 Suppose we have the edge points xi,yi that lie along the straight line having parameters ρ0,θ0. Each edge point plots to a sinusoidal curve in the ρ,θ space, but these curves must intersect at a point ρ0,θ0. Since this is a line they all have in common.

For example considering the equation of a line: y1= ax1+b

Using this equation and varying the values of a and b, infinite lines can pass through this point (x1,y1). 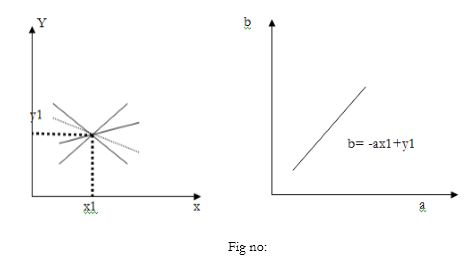 However, if we write the equation as

And then consider the ab plane instead of xy plane, we get a straight line for a point (xi,yi). This entire line in the ab plane is due to a single point in the xy plane and different values of and b. Now consider another point (x2, y2) in the xy plane. The slope intercept equation of this line is,

Writing the equation in terms of the ab plane we get,