The word soliton was coined in 1965 to describe the particle-like properties of pulses propagating in a nonlinear medium. The existence of solitons in optical fibers is the result of a balance between the group velocity dispersion (GVD) and self-phase modulation (SPM), both of which limit the performance of fiber-optic communication systems when acting independently on optical pulses propagating inside fibers.

As shown there, the GVD broadens optical pulses during their propagation inside an optical fiber except when the pulse is initially chirped in the right way. More specifically, a chirped pulse can be compressed during the early stage of propagation whenever the GVD parameter β2 and the chirp parameter C happen to have opposite signs so that β2 C is negative. The nonlinear phenomenon of SPM imposes a chirp on the optical pulse such that C > 0. Since β2 < 0 in the 1.55- μm wavelength region, the condition β2 C < 0 is readily satisfied. Moreover, as the SPM-induced chirp is power dependent, it is not difficult to imagine that under certain conditions, SPM and GVD may cooperate in such a way that the SPM-induced chirp is just right to cancel the GVD-induced broadening of the pulse. The optical pulse would then propagate undistorted in the form of a soliton.

The mathematical description of solitons employs the nonlinear Schrodinger (NLS) equation, which is satisfied by the pulse envelope A (z, t) in the presence of GVD and SPM. This equation can be written as

where fiber losses are included through the α parameter while β2 and β3 account for the second- and third-order dispersion (TOD) effects. The nonlinear parameter γ = 2π n2/(λ Aeff) is defined in terms of the nonlinear-index coefficient n2, the optical wavelength λ , and the effective core area Aeff.

Solitons are nonlinear optical pulses which have the potential to support very high optical transmission rates of many terabits per second over long distances. Figure 5.6 shows a block schematic for an optical fiber soliton transmission system. The major element in the transmitter section is a return-to-zero pulse generator.

A simple approach to generate RZ pulses is to employ an optical modulator and an NRZ-to-RZ converter which is driven by a DFB laser source. In this case a Mach–Zehnder modulator is used to modulate the NRZ data at the desired transmission rate (i.e. in the range 2.5 to 40 Gbit s−1). Instead of using a single NRZ data stream, however, it is useful to modulate an optical NRZ signal incorporating several multiplexed NRZ data streams before the conversion into RZ pulses takes place. At the receiving end the incoming signal requires conversion back from RZ to NRZ and then finally a demultiplexer separates the specific NRZ data for each channel.

The generation of optical soliton pulses is crucial to achieve soliton transmission where the transmitter is required to produce ultrafast RZ pulses. Ideally, an RZ pulse source can be realized using an RZ laser source such as a mode-locked fiber ring laser. In practice such laser sources are difficult to realize since they are required to maintain a fixed frequency during the generation of ultrafast RZ pulses. 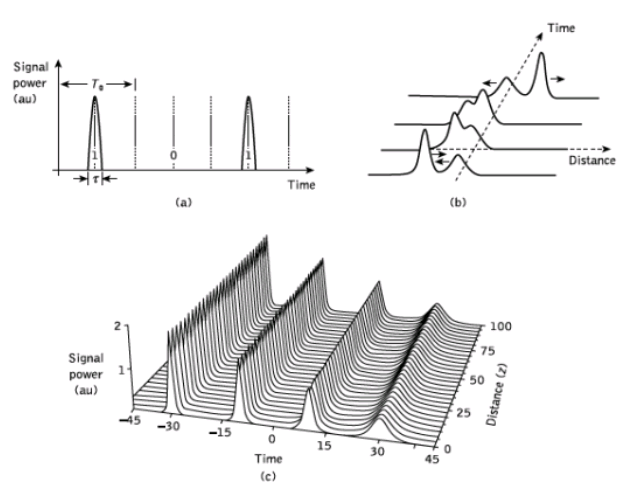