Like other inductive transducers, Linear Voltage Differential Transducer (LVDT) is also used for converting a linear motion into an electrical signal. The basic construction of an LVDT is explained and shown in the figure below.

As shown in the figure, an AC voltage with a frequency between (50-400) Hz is supplied to the primary winding. Thus, two voltages VS1 and VS2 are obtained at the two secondary windings S1 and S2 respectively. The output voltage will be the difference between the two voltages (VS1-VS2) as they are combined in series. Let us consider three different positions of the soft iron core inside the former.

Null Position – This is also called the central position as the soft iron core will remain in the exact center of the former. Thus the linking magnetic flux produced in the two secondary windings will be equal. The voltage induced because of them will also be equal. Thus the resulting voltage VS1-VS2 = 0.

From the working it is clear that the difference in voltages VS1-VS2 will depend on the right or left shift of the core from the null position. Also, the resulting voltage is in phase with the primary winding voltage for the change of the arm in one direction, and is 180 degrees out of phase for the change of the arm position in the other direction. 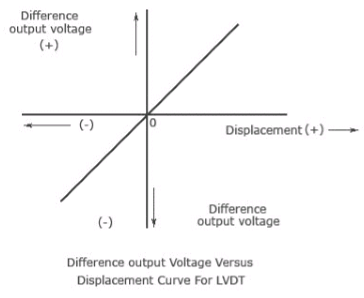