I found your blog to be very informative and interesting. On similar lines you can also check out https://bit.ly/2uhkWu3 Of which is also a very good blog on this very topic. Request you to continue writing on varied topics as we would like to read.

A PROGRAMMABLE LOGIC CONTROLLER (PLC) is an industrial computer control system that continuously monitors the state of input devices and makes daprogrammable logic controller, PLC, or programmable controller is a digital computer used for automation of typically industrial electromechanical processes, such as control of machinery on factory assembly lines, amusement rides, or light fixtures. PLCs are used in many machines, in many industries. PLCs are designed for multiple arrangements of digital and analog inputs and outputs, extended temperature ranges, immunity to electrical noise, and resistance to vibration and impact. Programs to control machine operation are typically stored in battery-backed-up or non-volatile memory. A PLC is an example of a "hard" real-time system since output results must be produced in response to input conditions within a limited time, otherwise unintended operation will result. 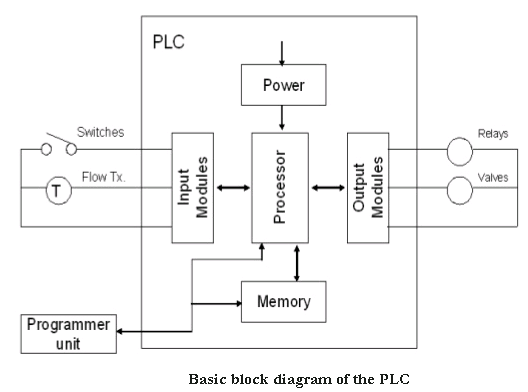 Before the PLC, control, sequencing, and safety interlock logic for manufacturing automobiles was mainly composed of relays, cam timers, drum sequencers, and dedicated closed-loop controllers. Since these could number in the hundreds or even thousands, the process for updating such facilities for the yearly model change-over was very time consuming and expensive, as electricians needed to individually rewire the relays to change their operational characteristics.

As an example, say a facility needs to store water in a tank. The water is drawn from the tank by another system, as needed, and our example system must manage the water level in the tank by controlling the valve that refills the tank. Shown is a "ladder diagram" which shows the control system. A ladder diagram is a method of drawing control circuits which pre-dates PLCs. The ladder diagram resembles the schematic diagram of a system built with electromechanical relays. Shown are:

In ladder diagram, the contact symbols represent the state of bits in processor memory, which corresponds to the state of physical inputs to the system. If a discrete input is energized, the memory bit is a 1, and a "normally open" contact controlled by that bit will pass a logic "true" signal on to the next element of the ladder. Therefore, the contacts in the PLC program that "read" or look at the physical switch contacts in this case must be "opposite" or open in order to return a TRUE for the closed physical switches. Internal status bits, corresponding to the state of discrete outputs, are also available to the program built-in.