Programmable Logic Devices or a PLDs are devices that consist of two or more gate planes that are interconnected and which can be programmed to give a required logic function. There are two types of PLDs: Programmable logic array (PLA) and Programmable Array logic (PAL) 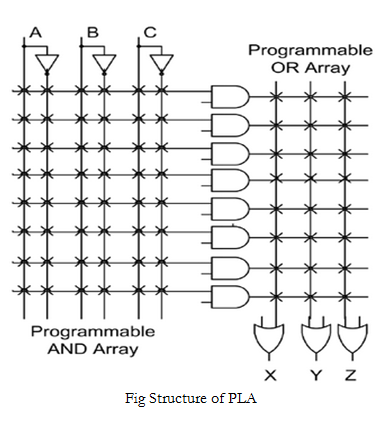 Programmable Array logic is the most commonly used type of PLD. It is a programmable array of logic gates on a single chip with an AND-OR configuration.

The special feature of PAL is that it has a programmable AND array and a fixed OR array. Also, each OR gate in the OR array gets inputs from some of the AND gates. That means outputs of all the AND gates are not applied to any of the OR gates.

The following figure shows the configuration of a PAL with 5 inputs, 8-AND gates (programmable) and 4-fixed OR gates.

There are 5 input buffers, one per input, which are used for reducing load on inputs. The buffers produce inverted and non-inverted versions of their corresponding inputs.

AND matrix- There are 8 programmable AND gates in the AND matrix. Each AND gate receives 10 inputs, which are the complement and uncomplemented forms of the 5 input lines. All 10 inputs are applied to each AND gate along with the nichrome fuse links intact. These AND gates can be programmed by opening the suitable fuse links, to generate 8 product terms.

OR matrix- The OR matrix consists of 4 fixed OR gates. Each OR gate receives inputs from the outputs of only two AND gates as shown. Input and Output circuits- the input and output circuits of PAL are similar to those of PLA. The number of nichrome fuse links is equal to 2M x n where M=number of available inputs and n=number of product terms. Tristate buffers are used between output of each OR gate and the device outputs. 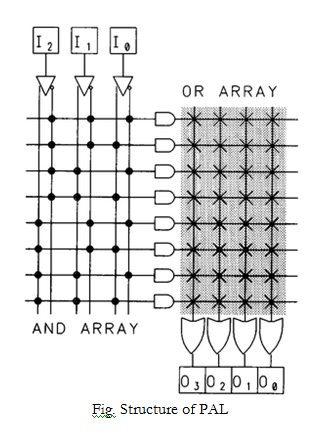