A/D converters convert an analog voltage to the digital output that best represents the input. As in the case of DIA converters, analog converters are also specified as 8,10,120r 16 bit.

The heart of the circuit is an 8-bit successive approximation register $[5 A R]$, whose output is applied to an 8-bit D/A converter.

The analog output $[\mathrm{Va}]$ of the $D / A$ converter is then compared to an analog input signal line by the comparator.

The output of the comparator is a serial data input to the SAR. The SAR then adjusts its digital output [8 bits ] until it is equivalent to analog input V in.

The 8-bit latch at the end of conversion holds onto the resultant digital data output. 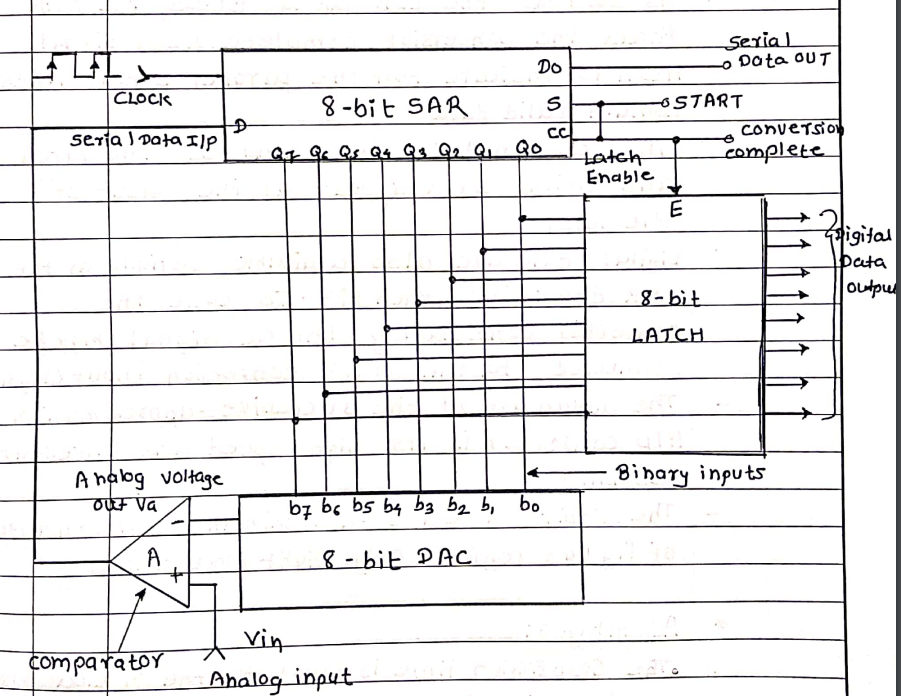 on the other hand, if the comparator output is high, the PIA output< V in, and the SAR will keep the MSB Q7 set.

In any case, on the next clock pulse low -High transition, the SAR will then either keep or reset the bit Q 6. This process is continued until the SAR tries all the bits.

As soon as the $\angle S B$ goo is tried, the SAR forces the conversion complete $\left[C_c\right]$ signal HIGH to indicate that the parallel output lines contain valid data.

The cc signal in turn enables the latch and digital data to appear at the output of the latch.

Digital data are also available serially as the SAR determines each bit. To cycle the converter continuously the c signal may be connected to the start conversion input (fig a'] The advantage of the successive approximation Alp converter is its high speed and excellent resolution.

The 8-bit successive-approximation A/D converter of fig (a) requires only eight clock pulses.