In some systems, an equilibrium exists between solid - liquid phases and gaseous phase is practically absent. Hence the effect of pressure on such system can be neglected. Then it is necessary to take into account only two variables viz. temperature and concentration.

Such system showing solid-liquid equilibrium is called condensed system and phase rule applied to such systems is as follows: 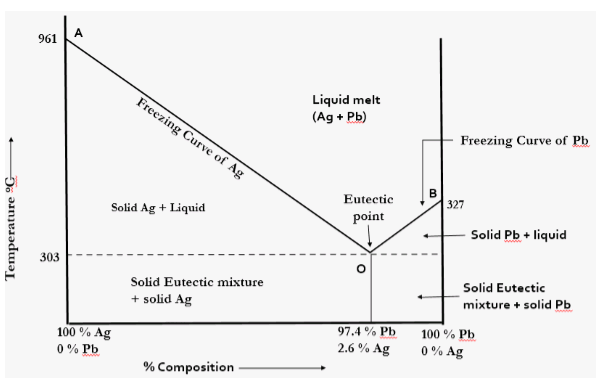 In two component systems there are four possible phases solid Ag, solid Pb, solution of Ag, + Pb and vapour. Since the pressure has no effect on equilibrium so the system can be represented by temperature concentration diagram at constant atmospheric pressure. As pressure is neglected the phase rule is called condensed phase rule.

1) Curve Ao. It is a freezing point curve of Ag. Ag Co exists as solid and liquid. Melting point of Ag falls gradually on adding Pb till the lowest point is reached. The solution gets saturated with respective to lead.

2) Curve Bo. It is a freezing point curve of Pb. At this curve the melting point gradually falls on the addition of Ag till lowest point it reach.

3) Point O. It is eutectic point. Here 3 phases co-exists and point O represents a fixed composition and system is in variant.

Below the temperature line of eutectic temperature, we have two regions.

$ \ \ $ a) The region marked eutectic plus solid Ag in which crystalline silver and solid eutectic are stable.

$ \ \ $ b) The region marked eutectic plus solid Pb in which crystalline lead and solid eutectic are stable.

4) Area AOB. It represents solution of Pb Ag. On lowering temperature the lead begins to separate out till the point O is reached.