The Monte-Carlo technique is a special technique of simulation, which involves the selection of random observations within the simulation model. This technique is restricted for applications involving random numbers to solve deterministic and stochastic problems. The principle of this technique is replacement of actual statistical system by another system described by some assumed probability distribution, and then sampling from this theoretical population by means of random numbers. 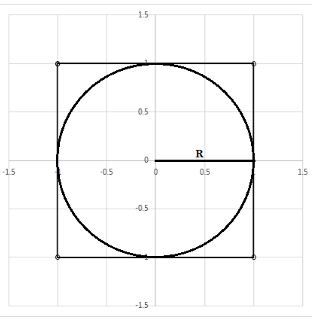 So, if you pick N points at random inside the square, approximately Nπ/4 of those points should fall inside the circle.

So, supposing we pick ‘N’ random points, out of which ‘M’ of those fall inside the circle, we can then calculate π by: