0
Discuss differential aeration corrosion with the help of a suitable example.

(a) Corrosion of metals partly immersed in solutions :

When a metal piece is partly immersed in a solution or water, the part of the metal piece above the surface of the solution is more aerated and behaves cathodic while the pans immersed in interior has less accessibility to oxygen and behaves anodic. The difference of potential created causes the flow of current between the two regions which results in corrosion. 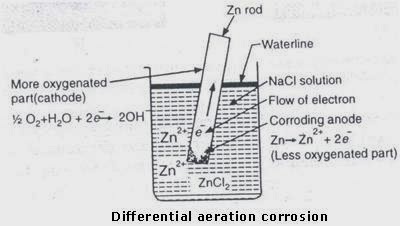